A telephone box isn’t scary. Well, not unless you’ve seen the short surreal horror called La Cabina – translated to The Telephone Box in English. Dating back to 1972, this Spanish TV production by Antonio Mercero demonstrates perfectly that an innocuous fixture in the public sphere can become a source of terror. And the only monsters making an appearance in the film are human.

Horror writer Stephen King once likened reading a novel to having a long and satisfying affair. He contrasted that with a short story being like a quick kiss in the dark from a stranger. This metaphor can be carried over to films. La Cabina at a mere 35 minutes long leaves a lasting, and disturbing, impression because of its short and surreal nature. Like any good short horror story it provides no explanations for the situation that the victim finds himself in.

Only read on if you’re prepared for spoilers!

The story begins with four workmen in a phone company truck arriving at a plaza surrounded by apartment buildings. They unload a red telephone box from the back of the truck and install it in the middle of the plaza and leave its door ajar. A human venus fly trap has been set.

Shortly afterwards a middle aged suited man sees his son off to school and then decides to go into the telephone box to make a call. He soon finds that the phone is out of order, but while trying it the door has closed behind him. Initially puzzled that the door won’t open he then becomes agitated and tries to force it open, to no avail. He doesn’t have to wait long before two men walking by on their way to work spot his predicament and fruitlessly try to pull the door open. Unfortunately they can’t stick around and have to leave. More people have noticed what’s going on and a crowd starts to gather – obviously this is entertainment in a town where nothing much normally happens. 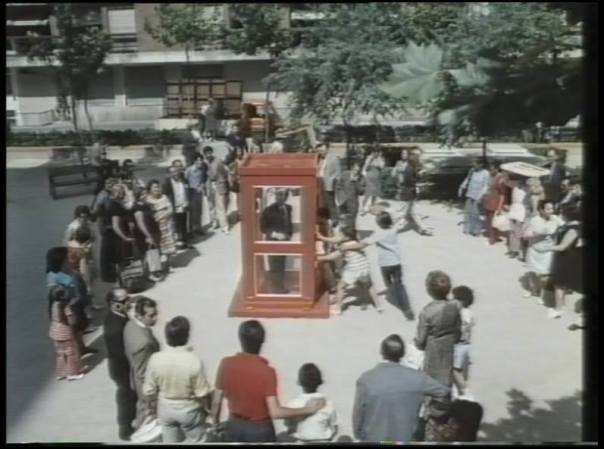 The mood of the film so far is fairly lighthearted, though it’s easy to feel sympathy for the man whose discomfort and embarrassment has become palpable now he’s also an object of curiosity and amusement. The next few minutes are played mainly for laughs as several people, including a couple of policemen, try to pull the phone box door open only to fail and fall over backward with the door handle in their hands. The crowd itself becomes a source of curiosity too. There’s a tall man stealing cakes from a tray a boy holds on his head; an old woman is invited to sit on a chair a man was taking somewhere; a couple of workmen stand around with a big mirror; and children taunt the trapped man.

Symbolism and homages quickly emerge. For instance, we notice that two of the onlookers are women sat chatting and knitting. This is presumably a reference to Madame Defarge who sits knitting while people go their deaths in Charles Dickens’ novel A Tale of Two Cities.

Eventually a fire truck arrives and the firemen decide to break the glass of the phone box. One of them gets on top of the box and is just about to smash the glass with a sledgehammer when the phone company truck comes back, its horn beeping for attention.

The phone company workmen proceed to load the phone box onto their truck. It’s at this point that the man inside realises that something is more than a little amiss with the situation. Despite his obvious panic and gestures to the workmen to get him out, the crowd wave him off with cries of “Good luck”. Having been so close to escape his fate is getting even more puzzling.

Like some kind of peculiar mobile freak show the truck drives through the town with the trapped man eliciting jokes by passers by and lots of friendly waves. Much to his chagrin, people continually misunderstand his gestures for help. On the way out of town they come to a halt in traffic and by the side of the road is a funeral party standing around a glass casket containing a corpse on display. This is an unsubtle way of signalling the man’s own fate. A little later while stopped at traffic lights another phone company truck pulls up alongside and on it is an identical phone box with a man stuck inside it. Looks of empathy and questioning pass between the two men before the other truck pulls away. Our man then becomes even more panicked and desperately tries to get the workmen’s attention to let him out. This is the first indication that he’s caught up in more than just an unlucky accident.

A neat touch is when we see a man briefly struggling to get out of a phone box by the side of the road. But in his case the door soon gives way, and he walks away little knowing what may have otherwise happened to him.

So now we know there’s a concerted effort to capture people. For what purpose we can only guess at, and will never find out. Around this time the soundtrack becomes portentous with low register rhythms. Driving out of the town there’s one final and meaningful encounter with other people. When the truck has to stop again some circus dwarves near the road look on, and they are the only ones to simply look and not laugh or wave. In return the man earnestly looks back at them. Maybe the dwarves who are used to being stared at because of their appearance identify with the man’s situation in which he’s an object of curiosity and fun. Then blatant symbolism enters when the camera focuses on a ship in a bottle held by one of the dwarves.

The journey continues on winding mountain roads, first up and then down. For no obvious a helicopter joins in following the truck from the air. Eventually the final destination gets closer as a tunnel into the mountainside is reached. The helicopter lands just outside and the pilot gets out to wave at the man as he disappears into the tunnel.

As the truck continues into an underground complex the soundtrack changes to sinister chanting in Latin somewhat like that used in The Omen. They pass men cleaning out phone boxes, and also a truck going the other way full of empty phone boxes. By this time the man is more anguished, but despite frantically banging on the glass he’s continually ignored. At this point I started to wonder, are the four workmen a metaphor for the four horsemen of the apocalypse, or is it just coincidence because four are needed to load and unload the phone box?

Soon after, the truck yields its unlikely cargo to an overhead crane that takes it away and passes it to a series of conveyor belts. The man’s bizarre fate is then made clear when he’s taken past corpses in telephone boxes identical to his own.

The man’s phone box comes to a halt next to one containing the other victim he saw earlier. That man has strangled himself with the phone cord rather than endure a lingering death. 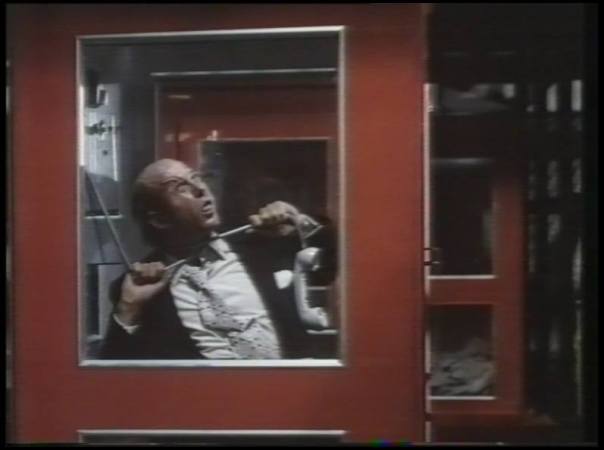 It’s all over for the man. He now knows it yet still makes a last effort of banging on the glass hoping to be let out. Desperately aware that he’s doomed the final shot of him is slowly sliding down the glass of his coffin in despair and resignation. What started out as an ordinary day for an ordinary man has turned into the kind of thing that nightmares are made of.

Turning full circle the film ends at the plaza where a shiny new telephone box is installed and its door left open. We are left wondering how long it’ll be until some other hapless person attempts to make a call.

I first saw this film on TV late at night over 30 years ago and it’s been stuck vividly in my memory ever since. It’s truly terrifying, playing to archetypal fears like people ignoring your pleas for help and being buried alive. The trapped man is brilliantly played by Jose Luis Lopez Vazquez, a Spanish actor with a substantial list of acting credits to his name.

The film can be watched here: 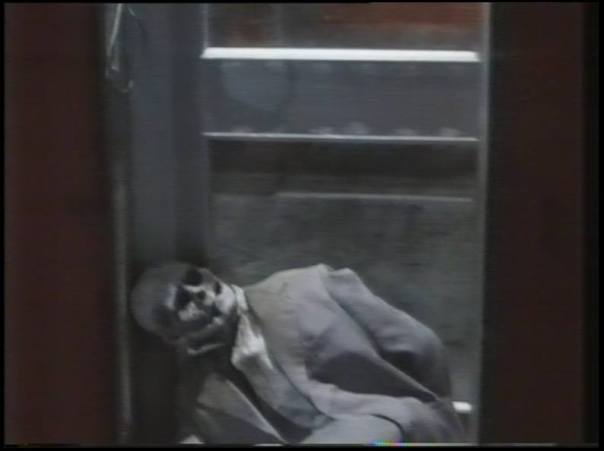 Dene Bebbington works part-time in IT but feels more at home writing horror fiction. He’s had short stories published in various anthologies (Dark Corners, Dark Light III, Behind Closed Doors, and Disrupted Worlds to name a few), three stories as podcasts at The Wicked Library, and is the author of the ebook novellas Zombie Revelations and Stonefall. He lives in Wiltshire, England, with his wife and a tank of greedy tropical fish.

www.LindseyBethGoddard.com
View all posts by lindseygoddard »