The Dead of Winter

Here it is again. Winter. I’ll be honest, I’m not a fan. Where others see beauty in a fluffy white glazing of snow, I see only three months of hibernation. Because I hate the stuff.

It’s no mystery why my mind tends to wander to the grim topic of death. I’m in the dead of Winter here in Missouri, after all. I’ve been thinking about the dead – more specifically, how different cultures remember the dead – and decided to share what I know.

Winter takes my mind to dark places. Perhaps its icy clutches haunt me…

Over the years, humans have honored their dead in peculiar and sometimes macabre ways.

Ever heard of post-mortem photography? Straight from Wikipedia: “Post-mortem photography (also known as memorial portraiture or a mourning portrait) is the practice of photographing the recently deceased. These photographs of deceased loved ones were a normal part of American and European culture in the nineteenth and early twentieth centuries. Commissioned by grieving families, postmortem photographs not only helped in grieving, but often represented the only visual remembrance of the deceased and were among a family’s most precious possessions.”

No disrespect intended, but having grown up in a different century, some of these photos seem a bit disturbing now…

Look closely. The youngest child on the far left is deceased, propped up with a wooden stand. You can see the discomfort and sadness in her brother’s face.

The story goes that the photographer drew pupils on her closed eyelids to make her more life-like. 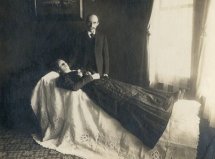 Sometimes even a man’s best friend wanted to say goodbye.

Then there’s the following photograph, which has become somewhat of an urban legend, because no one can prove or disprove the story behind it. People say the reason all the children seem to be frowning, or even grimacing, is that they are being forced to pose with a classmate who died the day before.

They say the deceased student was propped up with a wooden board and her head was tied to the board by means of a head scarf. Do you see her? Look closer… 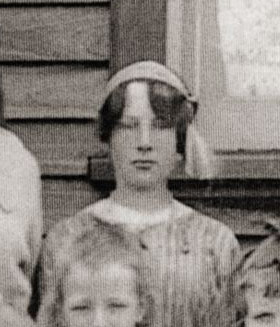 And then there are cultures like the Toraja people of Indonesia who keep their post-mortem loved ones around for weeks, months, or even years after death, until enough money is raised for a fitting and proper funeral. During this time, the deceased relative is symbolically fed, dressed, cared for and taken out, and is very much a part of their family’s lives.

But if you think post-mortem photography and mummification is strange, the thought of drinking from a human skull might push you over the edge, right? That’s probably why the Aghori tribe of India are considered taboo among their neighboring communities. They ritualistically smear themselves with cremated ashes, consume human flesh, and drink from skulls to become closer to the spiritual world of the dead. 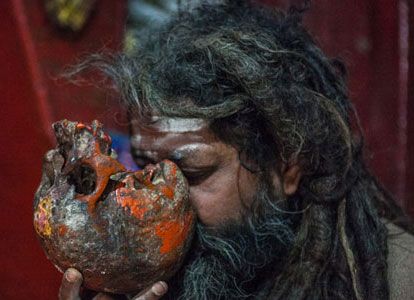 To each his own, but that’s not quite my cup of tea.

So there you have it. THIS is what Winter does to me, people. The dead of Winter… when the deceased whisper to us on the icy breeze, telling us to cherish our precious days, albeit bitterly cold. Winter will pass, just as humans pass, and the world will continue to spin.

Well, as usual, this has been a bit of uplifting cheer from your admin here at Dirty Little Horror. Happy Winter, folks.

www.LindseyBethGoddard.com
View all posts by lindseygoddard »